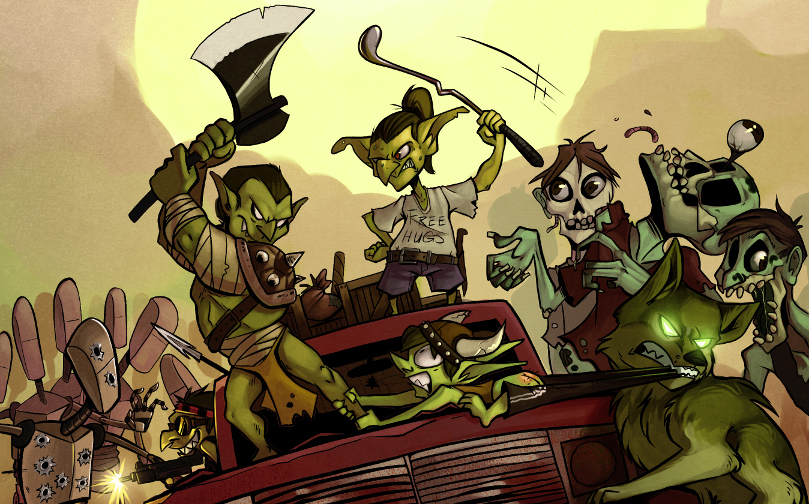 After years in development and editing, we at the Drunk and the Ugly finally debuted the playtest draft of our new game Gobblin’: The Goblin RPG at Gen Con 2017. If you’re interested in playtesting this game, send an email to thedrunkandtheugly@gmail.com

In the world of magic and dragons, knights and treasure, elves and trolls, there lived a race called goblins. Goblins were intelligent enough to cause trouble, but stupid enough to lack any foresight or responsibility for their actions. They were curious and greedy enough to want everything they saw, but too lazy to work for it and too cowardly to take it. Their wasteful lifestyle ruined the environment all around them, breeding like cockroaches until they were forced to expand further.

The wisest of races gathered and agreed they were a major nuisance on their world’s economy, environment, and all life around them. The goblins had to be dealt with severely. Rather than waste the manpower and resources in an all-out war, the highest magi and sages created a spell that banished them from their world, hurling every living goblin from their reality. The entirety of the goblin race landed in another time in an alternate dimension, one stripped of almost all sentient life.

There were no humans in this world, only the remains of their work. The world had been ravaged by war, with the goblins stranded among the rubble of mankind. Realizing what had happened (several minutes after they arrived and their brains caught up to speed), the goblins all cheered out as one. They believed this was their reward for living their happy lives well enough that some god or wizard or giant in a funny hat had granted them an entire world full of free food and interesting things that exploded when you poked them right. There was no one to lord over them or slay them just for the experience of it all. After centuries of hanging at the bottom of the food chain (just above blue slimes and kobolds), a nuclear holocaust turned out to be the best thing that had ever happened for them.

Note: This is a con game and is next to some very rowdy boys so the noise levels are a bit high early on.  This clears off as the recording continues.