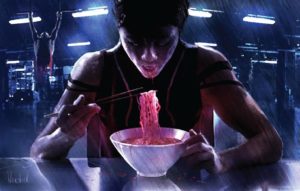 Kanawa: They calling it FW-48? FW?
j0benz: I mean, strictly speaking, there are an almost limitless combination of things that acronym could mean. Even if you restrict yourself to those languages that use the Greek alphabet, ignoring other languages’ uses of the “fuh” and “wuh” phonemes-
Kanawa: I get it, but don’t you think that’s cutting it a little close? Especially since they’re all field operatives? Percussive: It’s worked out so far. Fame covers a multitude of sins.
Deep_Moss_Green: Someone’s eventually going to cotton to the fact that these folks tend to show up in just the right places at just the right times. Especially if we have any “repeat customers” with any sort of opposition research.
Percussive: That’s a fair consideration, I’ll allow.
MMing: I have a meeting with two of them in an hour – re: Operation PANTHEON RAINFOREST. Just some nosing around after a missing Crow, and they’re already in the theater. I’ll let you all know how it goes.

Music from https://filmmusic.io
“Half Mystery” by Kevin MacLeod (https://incompetech.com)
License: CC BY (http://creativecommons.org/licenses/by/4.0/)